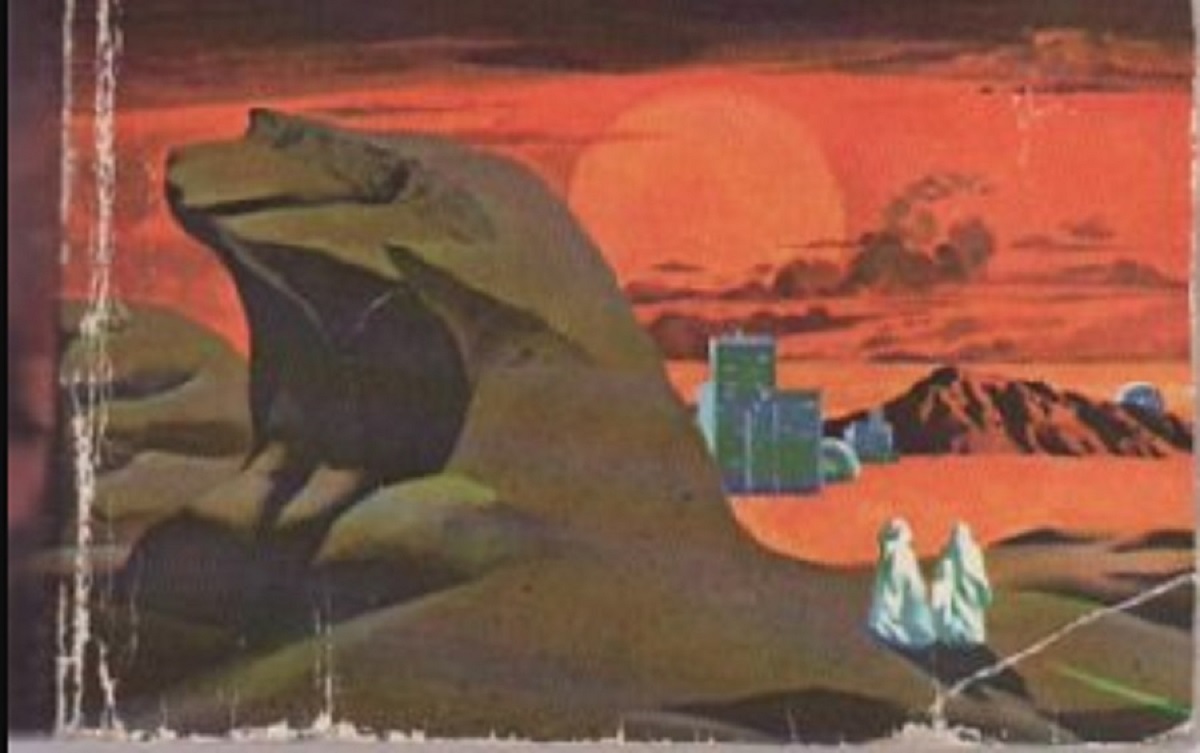 I read Dune (the first book, which is all this entry is focusing on) when I was twelve or thirteen. I would love to say I stumbled upon it myself, but no, like so many throughout history, I picked up a particular cultural staple because a crush was reading it and I wanted to burrow my way inside their inscrutable mind.

Fortunately, at the end of the day, Dune ended up legitimately being up my alley where LOTR, Star Wars, Game of Thrones (not to mention the “harder” stuff) never would be.

I’ve been trying to put into words why that is. Most well-regarded SF/fantasy has mind games, politics, sensuality, prophesy, the supernatural… so too does Dune. How is it different, other than being infused with personal formative nostalgia?

Let’s be honest here: it probably isn’t. The most I can really say is why I like Dune.

-There is military combat aplenty, but the primary conflict is interior. Against his desire for freedom and autonomy, Paul is being irresistibly dragged… yet the very traits that cause him to be borne toward his fate (stubbornness, skepticism, pride) are the traits that initially make him want to rebel against it. Also the place we start feels small and familiar: there’s a teenager who wants to be able to sleep in, be idle, have moods… and his obligations do not allow it. Then before you know it all hell breaks loose and his childhood is a bolted door. Universal, obvious, but effectively exhausting. It could be that the hyper-focus on Paul’s dreams and inner world was a storytelling method especially suited to this extreme introvert.

-At the same time, when he lives out part of the prophecy, there’s the heady rush of rightness, of serendipity. Even those of us who don’t believe in fate have likely had a similar feeling just by doing something we are widely recognized as good at, and it is intoxicating (so much so that the feeling could be easily exploited/corrupted, which is a fascinating tension). Then sometimes we are gifted at things we hate doing, which is a bitch in its own right.

-The Bene Gesserits’ stony stare down the mouth of fear is a seductive slice of wish fulfillment, especially to young people who desire more control over their situations. Not to mention the Gom-Jabbar-induced journey through being inwardly crushed and overcoming, which IMO Chalamet portrays so well in the current version through facial acting and THOSE STORMY EYES. I mean, it’s kinky as hell, y’all. (Though here is a good place to note that I am also fond of how camp and extra and grotesque Lynch’s Dune was.)

-As my DP likes to point out, the stakes seem lower when it’s implied that a character is The One. Oh, they’re about so enter a hand-to-hand fight? I ain’t worried, the messiah ain’t dying today. Oh, they’re meeting the beautiful woman they had visions of, but she ain’t impressed? That’s cool, she’ll obviously come around. BUT to that I say, so much of the exhilaration comes from witnessing the transformations in character we know are coming. It’s not always about WHAT will go down, but HOW it goes down.

-As a preteen, I loved the extensive world-building because I felt privy to specialized knowledge. I had to learn swatches of a whole other language and culture to read this thing, which made me feel clever and somewhat elite. Nothing noble there, just the way it was. Also, those of us who never had the discipline to become expert at anything enjoy the vicarious thrill of young Paul being able, more often than not, to call up his training when needed – even those bits it seemed he imbibed only casually.

[Aside: Though what I do here is less review and more memoir, I always like to endorse at least one review of the work at hand. This coverage by Melanie McFarland at Salon.com, while perhaps more gushy than is my wont, is also astute and says more than a few things that ran through my mind while watching the new film last night.]

Anyway. All those years ago I really dug the poems that appeared throughout the book, and a couple of them had such a strong musicality that I couldn’t resist incorporating them into a song. This was back when I was still using a dual-tape-deck karaoke machine to multitrack (of course with compounded sound deterioration each time), and I put the song on a compilation for a school project. This weekend in the resurgence of Dune mania I dug it out and relearned/revamped it (the original was beyond salvage).

-The original intro was improvised. I couldn’t really relearn exactly what I did, so I improvised a new intro.

-Younger Me took liberties, both by Frankenstein-ing together two different verses (albeit from the same scene) as well as by altering the second one to better fit rhythmically.

-I am sure the same verses have probably been co-opted by prog and/or metal bands the world over. But I have not sought out and listened to any of them (yet).