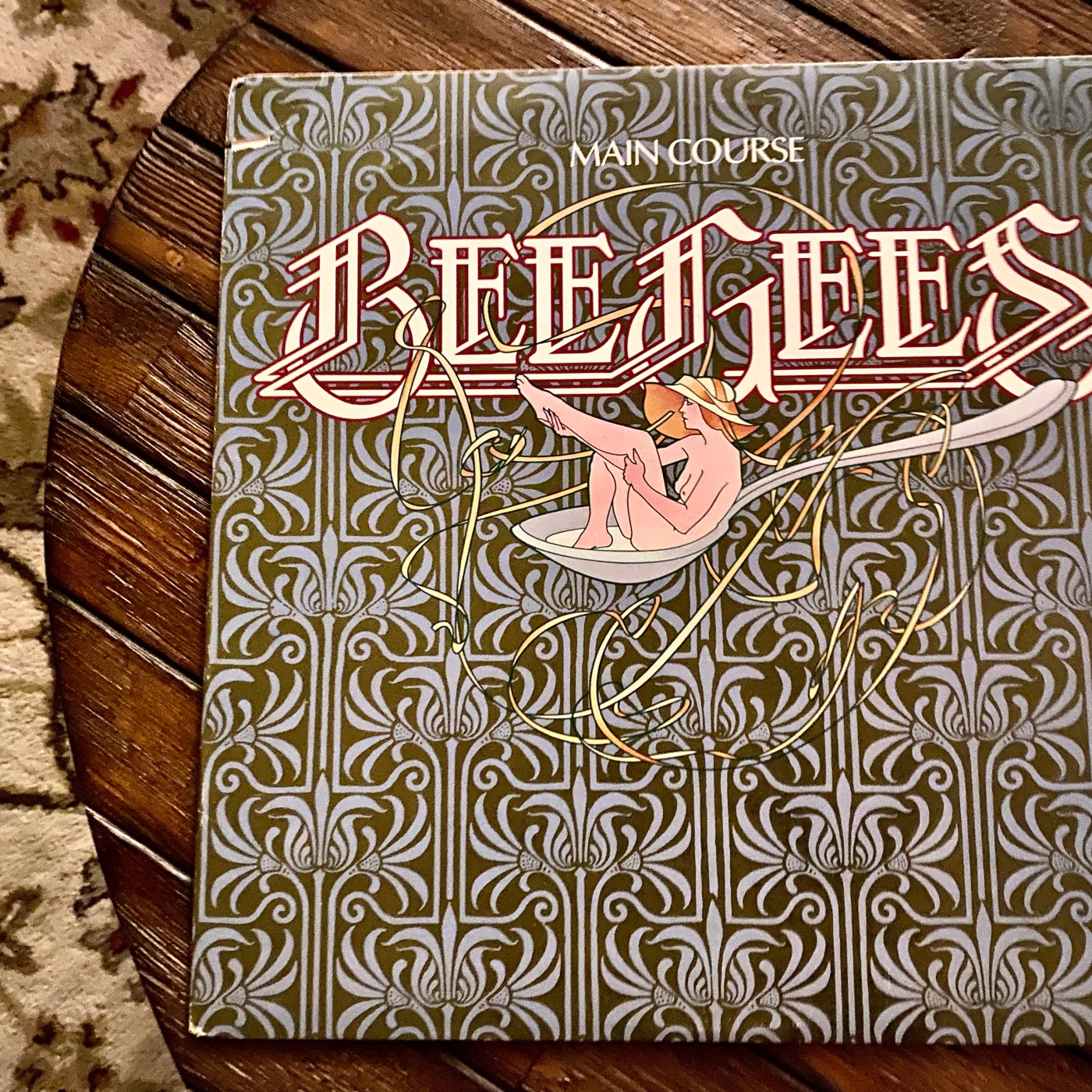 Admittedly that’s a strange title for an entry. But, it’s a quote from Domestic Partner related to what I’ve been working on lately.

You’ll notice that my last nostalgia post mentioned the Bee Gees among adult contemporary artists I grew to respect and enjoy as a kid, disengaged as I was from concerns about what was “cool” to my peers at the time. To this day I’d say they helped whet my appetite for compelling story songs, tight harmonies, interesting vocal textures, and that brilliant British major/minor schizophrenia. Some of their early songs flirt with psychedelia in a haunting way. They also primed me for dream-pop with the creamy atmospherics of a lot of their production.

In helping DP’s parents move houses recently, I came away with several classic vinyls, among them the Bee Gees’ Main Course (one I’d never heard of before).

I was pleased to find that a handful of unfamiliar tracks really excited me, and whereas I didn’t absorb ALL my honorary in-laws’ hand-me-downs into my permanent collection, this one was a keeper.

And so began a string of Bee Gees-related serendipity.

About a month ago I was browsing YouTube and stumbled on a Bee Gees cover by Foo Fighters I’d had no idea about. Shortly thereafter I checked Facebook and a friend of mine had posted about the influence of disco on Dave Grohl.

The other night I found an early performance from 1963 in which the boys (particularly Robin) hammed it up in a most amusing manner. The following day, as I was pulling up this performance again to add it to a playlist, I was simultaneously listening to World Cafe. I was looking straight at the thumbnail of the performance when Kaleo introduced a new song by the artist Jade Bird that he described as influenced by the Bee Gees.

A couple evenings later, hot and heavy into recording (and having completed most of this write-up as well), I decided to partake of a Bee Gees Greatest Hits album to keep me in the right headspace. The day after that, I was listening to WNRN on my lunch break. The DJ played a Noel Gallagher song, then described the cover of the album from which it came as Gallagher’s homage to the cover of a Bee Gees Best Of album.

So in short, guys, it appears the Bee Gees are having a moment, and I am here for it. I’m not usually one to find myself in step with the zeitgeist, but things just fell into place this time.

-This song is the most cabaret thing I’ve ever heard from them, so my doing it is pretty much a duh (in fact I think this song is very Supertramp, and this is coming from someone who has been known to enjoy quite a bit of Supertramp).

-The Bee Gees have been through some dark sh*t, so it seems all the more fitting that their music ended up in that staple of (optimistic) nihilist film that is Saturday Night Fever, as well as representing Joker in Suicide Squad (though it should have been officially used for Joaquin Phoenix’s Joker instead).

-The interspersed talking lines on my track are some of the more evocative, metaphorical-sounding bits from an erectile dysfunction ad. I repeat most of them more than once, but they are as follows:

-I was once smitten with a woman I could barely keep up with. It also happens that my hair began to fall out around this time, prompting speculation that the stress was causing it.

– A realist with very niche sexual or romantic predilections may find themselves with a nagging back-of-mind thought: what if circumstance lands you with a sort of second life later on, and certain opportunities present themselves, but you’re too old and tired to do anything about them?

-Though opposite-sex covers, even those without pronoun changes, are common, I can’t think of the last time I heard a young(ish) woman singing from the perspective of a middle-aged man who is sexually exhausted. So I said to myself, why the hell not.

I’ll finish with a quote from Pete Paphides via Medium: “As lyricists, the Bee Gees are rarely singled out for credit, but their peculiar, poetic genius for writing about love as though it were an existential affliction connects all three phases of their collective life. The subtext of so many of the Gibbs’ best songs…seems to be that our time on earth is only slightly less unbearable with love than without.”